Movin' On Up (or at least stepping laterally)

Hey, all! For anyone who might have bookmarked this site (who are you and thank you), I just wanted to let you know that I've moved. From this point forward, the sheilacjohnson.net domain will redirect you to my spiffy new WordPress site at sheilacjohnson.wordpress.com. I'm grateful you've read my posts here, and I hope you'll follow me there.

Thanks!
Posted by Sheila at 7:47 PM No comments:

Tales of the Rose Knights

Since January, Daily Science Fiction has been posting ongoing entries in this particular series of tales every other Wednesday. You don't get to know everything about the world in which the Rose Knights serve. You just get glimpses into their lives, a different story for a different knight, just enough to give you an idea of who these fighters, almost all women, truly are. And they're beautifully written stories, and I've spend most of these particular Wednesday mornings trying to figure out how to encourage the day to pass more quickly so that I can go read the new story on my lunch break.

But don't take my word for it. Read the Tales of the Rose Knights here.
Posted by Sheila at 6:41 PM No comments:

Forgot to post this when it became available last week. But! If you're interested in the American Writers Museum (coming to Chicago in 2017!), or you simply want to have an existential crisis trying to pick just one worthy author and one worthy book you think the museum should include, then take a look at this survey linked below.

News from the world of poetry isn't the kind of news that always makes it through the chatter; if you're not keeping up on your reading or your podcasts, you might miss some of it. I was sad and ashamed to learn only recently that Philip Levine, one of my favorite poets, died last year.

Yep, he was old, but he knew what it was like to be tired, and lacking money, and worked to the bone by some demanding jobs, yet still in love with the world. If that doesn't make him a poet for our age, I don't know what does.

Read "What Work Is" by Philip Levine
Posted by Sheila at 10:00 AM No comments:

"There Are No Carriages or Footmen in the Suburbs"

Heya! I have to say, I like this possible trend of being able to announce stories getting published at the start of the year.

I've known that this story was going to be featured on Black Denim Lit for some time; now I'm very happy to get to share it with you. It features Death moving into a suburban duplex, so I hope you enjoy it!

Click this link to read "There Are No Carriages or Footmen in the Suburbs"
Posted by Sheila at 8:25 PM No comments: 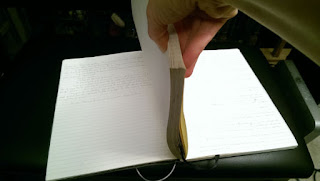 When you work on writing stories, it's hard to show people what you're working on via social media or a website because, oops, putting stuff online usually counts as publishing it in the eyes of magazine editors that prefer to be the first publishers.

But held up between my fingers is 2015 in my notebook. This is where most of my Saturday and Sunday mornings or afternoons went after I got my shit back together in the spring; this is my year in review, heh. For a lot of these stories, this is closest they'll get to being seen, because the work was just practice or wasn't good enough. Others have been read aloud or will be read aloud. And some of those I hope to collect with other ones in a pretty package later this year.

I'm not saying that I'm better than anyone else interested in the moderately insane craft of writing, and I'm certainly not saying I'm harder working. Just that I tried, and I hope to try some more, and I'm out here, and thank you.
Posted by Sheila at 7:06 PM No comments:

So. A few years behind the times, I know, but a couple of months ago, I stumbled across Daily Science Fiction. Now, it's become something I really look forward to reading on the weekdays.

For those who aren't familiar with it, here are the important points that I hope will motivate you to check it out:
Below are two of my recent favorites. Check them out--maybe you'll enjoy them, too!

"What Wags the World" by Sarah Pinsker
"In Autumn" by Theodora Goss
Posted by Sheila at 10:00 AM No comments: 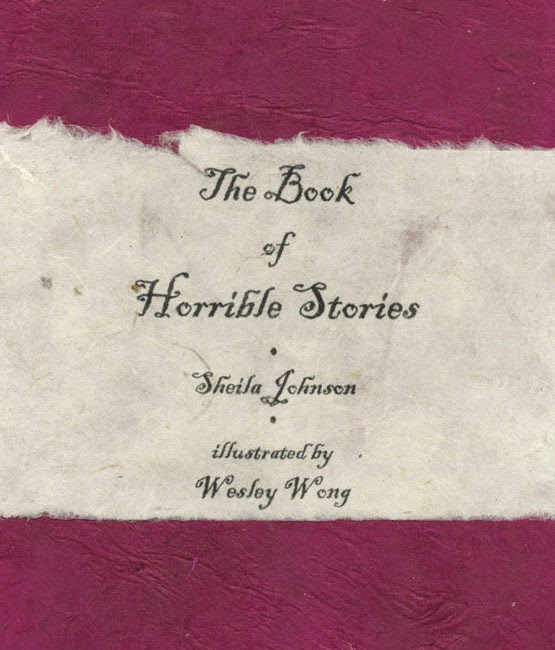 THE BOOK OF HORRIBLE STORIES

As an e-book for Kindle devices, available for $0.99 at Amazon.com. Click here!

And as a handmade hardcover, assembled from handmade and recycled materials as detailed in both this blog post and this one. UPDATE--sold out! 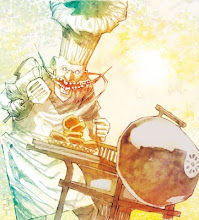 THE PEOPLE HE THOUGHT HE KNEW

Horror Stories from the Suburbs

In this collection of short stories, you'll meet, among others: a twenty-something office assistant who finds herself drained by her job during the day and by a vampire at night; a man whose neighbors run away from him when all he wants to do is organize the annual block party and barbecue; and a father whose Christmas gift to his daughter may come at too great a price, even if it is the biggest toy of the season.

These stories were written during a year spent living in the suburbs of Chicago. The book is a perfect-bound paperback, hand-made by me, with interior pages printed on 100% recycled paper and stellar cover art by Christopher Mitten. Shipping to any U.S. address is included in the price! (For shipping outside the U.S., please contact me before ordering.)

Sheila
A woman of character... 22 characters in my full name, to be exact. I've had a lot of job titles in my life, including "writer" and "proofreader." To get an idea of what I've worked on, please visit my public profile at www.linkedin.com/in/sheilacjohnson.